Grade 8 pupil Oscar brings an upbeat attitude and positive values to his education. Recently, we interviewed this Huili School Shanghai Academic Scholar. Here he shares with us how he discovered his talents in music and maths and how he is learning to be a global citizen who embodies the Huili Values.

Playing in an ensemble versus going solo 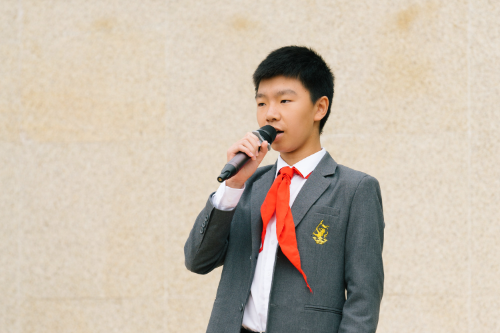 Oscar originally played the piano, but after three years of study, he found himself drawn more to the violin. He then channelled his talents toward that instrument. Eventually, he joined the school’s orchestra, performing in its winter and summer showcases as well as other school events.

He enjoys practising and improving at his instrument and loves classical music. When asked whether he prefers performing solo or as part on an ensemble, he says he prefers the ensemble. While it may be at times challenging to keep time with his fellow performers, he finds the harmonious cooperation and team spirit of the playing together to be deeply rewarding.

A talent for solving problems

Oscar has a keen interest in maths as well. He has a talent for pattern recognition and enjoys solving problems. The skill served him well when he took part in the American Mathematics Competition. Oscar ranked in the top 5% in this advanced global competition.

He has a natural talent for numbers, but he has not yet decided if he wants to pursue math as a career. For Oscar, the future is full of options. Currently, he is considering returning to Huili to become a teacher himself.  In the meantime, he thoroughly enjoys learning from his teachers and classmates in Huili's mathematics club. 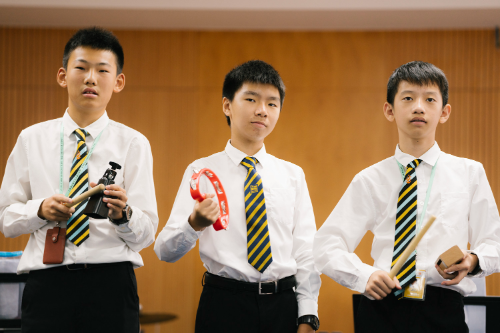 Learning what it means to be a global citizen

Oscar pays attention to current news in China and abroad. He has taken part in the school's Model United Nations (MUN) and Mock Trial courses to gain a better understand of the world around him.In the MUN course, he represented Kazakhstan and called for global attention to animal protection and environmental resources in the country. Kazakhstan, he learned, is at a disadvantage and faces many problems related to its environment and natural resources.

It was an opportunity for him to apply his problem-solving skills in negotiating the differing viewpoints among his fellow MUN delegates. The entire exercise served to broaden his horizons. If MUN gave Oscar a macro view of current events, Mock Trial gave him a micro view. In the course, Oscar had the opportunity to participate in a simulated court trial. Each pupil took on a role in the court, like the judge, lawyers, witnesses, jury, etc.

Oscar chose defence counsel as his role, and carefully researched the case before going to trial. During this process, the teacher explained the relevant legal provisions, the meaning of the rule of law and the legal guidelines. Mock Trial enabled Oscar to understand the legal process and theories behind the law.

MUN allowed him to understand current events from the perspective of a global, he explains.  Mock Trial, on the other hand, has given him a deeper understanding of how societies order themselves and serve justice to their citizens. 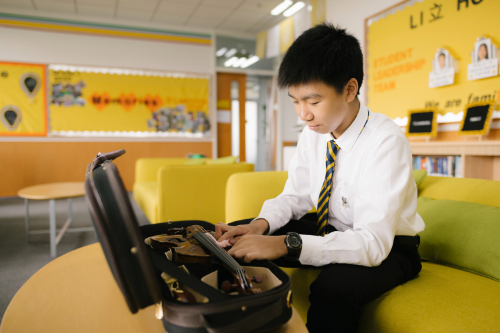 When Oscar learned he received the scholarship, he thought back to the people he met on his Grade 6 trip to Guizhou. He had the opportunity to interact with pupils from a local school. He realised that not everybody has the educational opportunities that he has enjoyed, and he was inspired to help.

He shared his thoughts with his mentor in the High Attainment and Talented Programme, Master Ms Stella Zhou who was very supportive of his idea. Ms Zhou also introduced him to the school's ongoing charitable projects, such as the Special Olympics United School Project for pupils in cooperation with Pudong Fudu School, the Endangered Birds Conservation Initiative and the Youth Leadership Program.

Charity, he realised, is not just about giving and receiving, it is about the wisdom to optimise the allocation of resources and the achievement of mutual parties.

In his three years at Huili, Oscar has experienced many ‘light-bulb’ moments that caused him to consider returning to Huili to be a teacher. He said that he felt the mutual respect between teachers and pupils. Giving back to Huili is his way of passing on what he has learned to the next generation of pupils. It is a sincere expression of the Huili Values.

Why do we need PhDs in fundamental education? - Ⅱ