The Spark That Will Light the Flame of Our Imagination

However, though 2020 certainly has not gone the way anyone intended, the English Department saw an opportunity to give pupils something invaluable: insight from Carnegie Award nominate author, Julian Sedgwick. We are hugely grateful that Julian was able to deliver two workshops to grade 6 and grade 7.

George Stekelis Junior High English Teacher “I rarely end up where I was intending to go, but often I end up somewhere I needed to be”.Douglas Adams, the author of my favourite book, The Hitchhiker’s Guide to the Galaxy, once wrote. 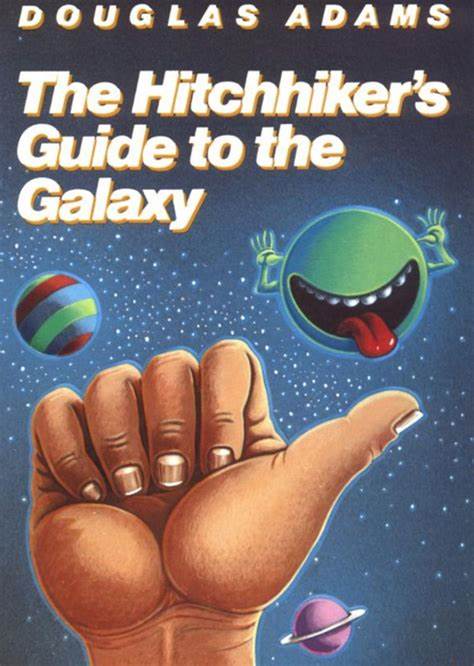 Like life itself, this academic year has been filled with twists, turns, sudden drops and more ‘I didn’t see that one coming’ moments than an Agatha Christie novel. Through all the difficulties of the last few months, pupils have been able to take comfort in the imagined worlds of great authors like Sir Arthur Conan Doyle and Frances Hodgson Burnett. Storytelling at its heart is the way that we communicate deep and personal ideas about life, the universe and everything. In the best of times, stories can give us laughter, joy and understanding; in hard times they can give us comfort, hope and the inspiration to fight another day. To complement their work on storytelling and to give our Junior High pupils a positive experience towards the end of this unusual  academic year, I made contact with the English Carnegie Award nominated author, Julian Sedgwick, to see if he would be interested in speaking to our pupils and further fan the flames of their love of reading, as well as offering some guidance on what it takes to have an idea and develop it into a completed novel. 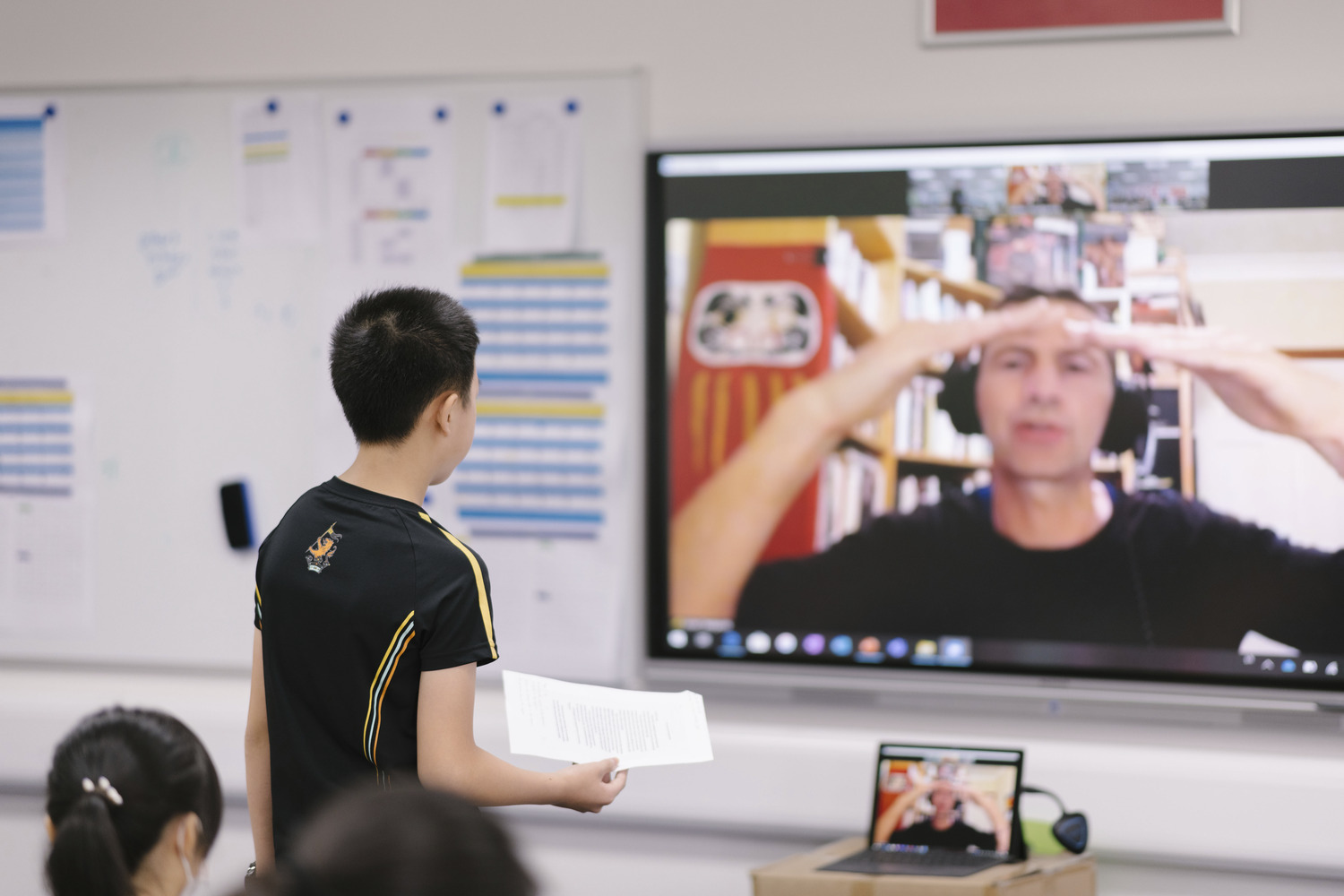 With a lifelong interest in China, and having previously spoken to pupils at Wellington College International Shanghai, Julian was delighted with the opportunity to engage with our pupils. Below you gain some insight into the man himself, as Julian describes the experience of working with our pupils.

Special Guest Julian Sedgwick As a writer for children and young adults, I have made over 200 school visits, and spoken to and worked with thousands of children over the last decade. This has become the part of my job that I value the most: interacting with bright young minds, stimulating curiosity and a desire to read about other cultures, and hopefully firing up enthusiasm for writing and reading in general. Like many authors, I hope my books function partly as ‘mental gyms’, where children can see how other people deal with and overcome problems in their lives. My new book, scheduled for next year, is set during and after the 2011 Japan earthquake, tsunami and radiation disaster. I have also written about turbulent 1920s Shanghai (in Ghosts of Shanghai), near future England (in the graphic novel Dark Satanic Mills) and London under V2 rocket attack in Orpheus Black. These are all problematic settings – and obviously COVID-19 has brought us all a massive problem to work through now. 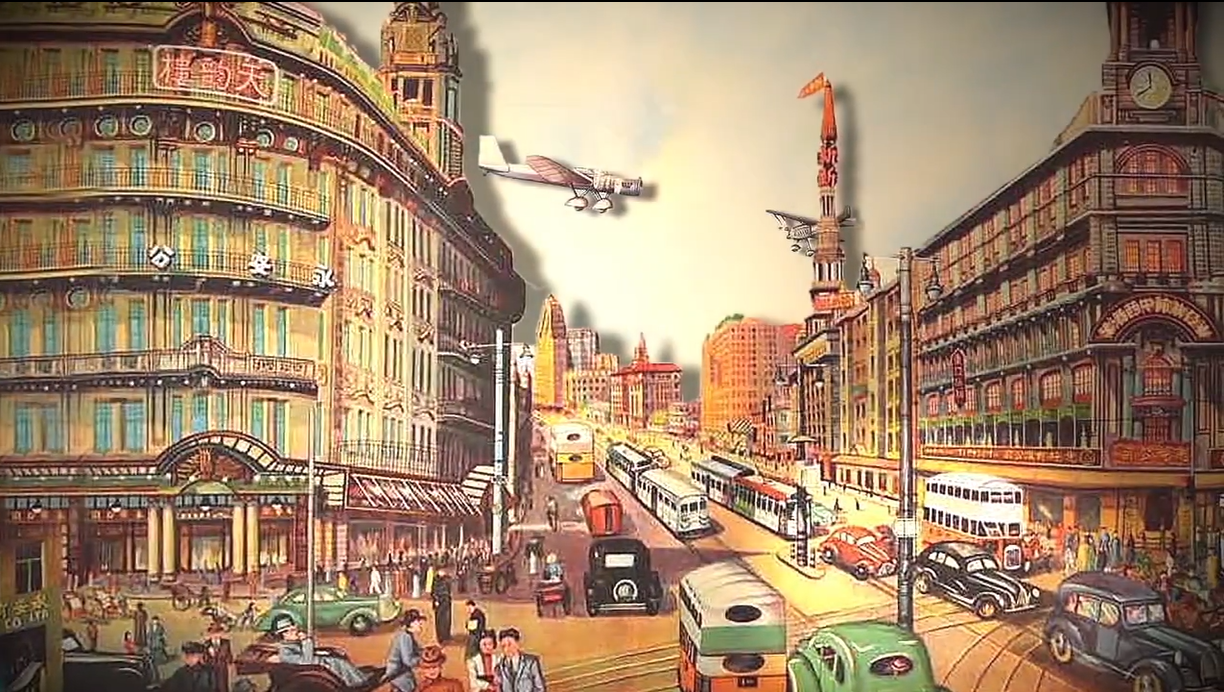 I was enormously grateful to the pupils and staff of Huili School Shanghai for welcoming me into their classrooms for visits to grades 6 and 7 over the last couple of weeks. Despite the very early hour here in the UK, it felt exciting to see pupils back in class, and to interact with them across 6,000 miles – even through masks – was a very moving experience indeed. 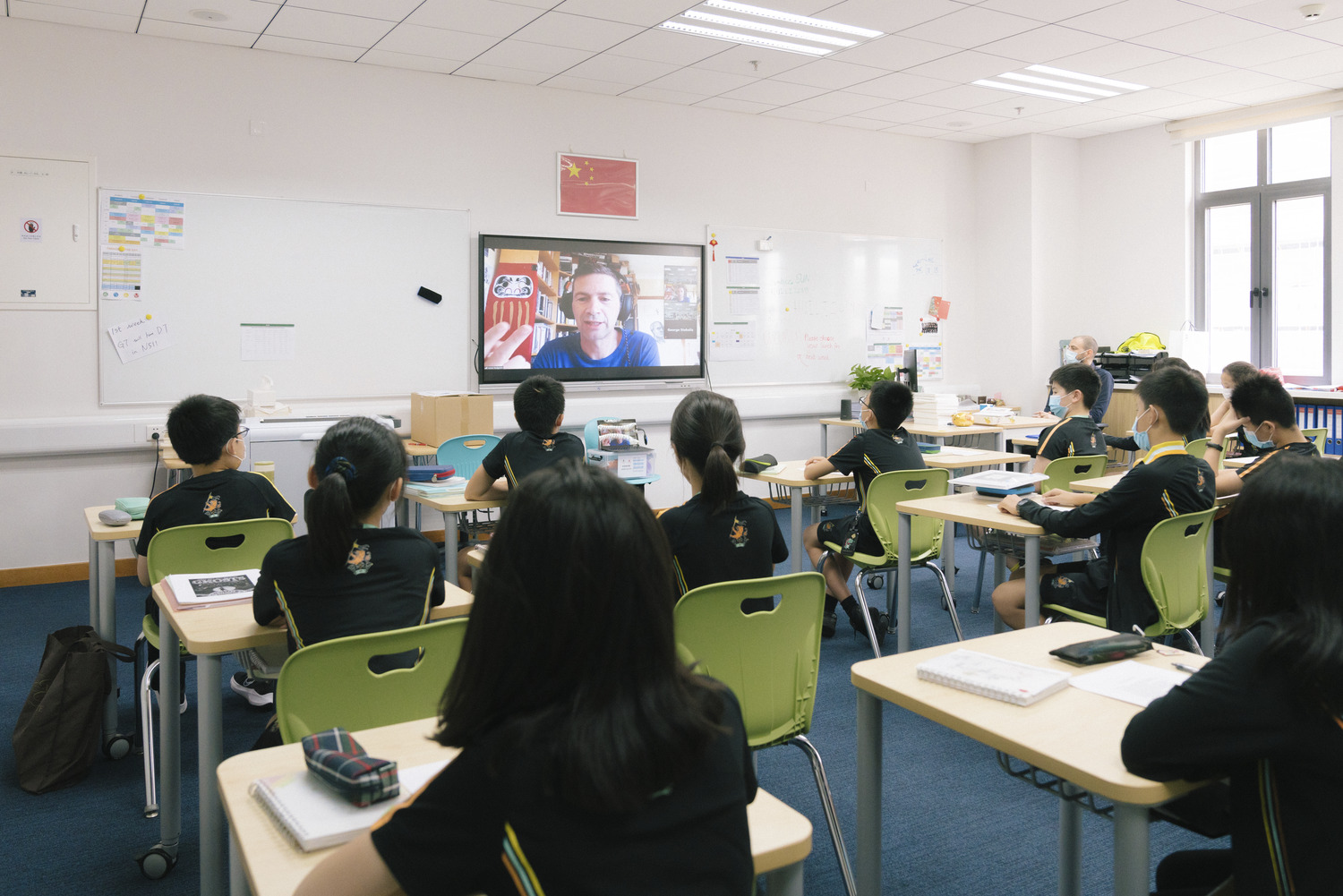 We looked at the motivation and setting for Ghosts of Shanghai, and then in a second workshop examined the many stages of writing that went into creating the trilogy. And as my involvement, I also reviewed the work of some select pupils who have written an imagined chapter 2 for one of his books. I was struck by some very thoughtful and tricky questions that were posed to me – all the more as it was 4am here! – and was impressed by the attention to detail when pupils came forward to edit my early and flawed draft of chapter 1! I look forward to seeing what they have done with their own versions of chapter 2. 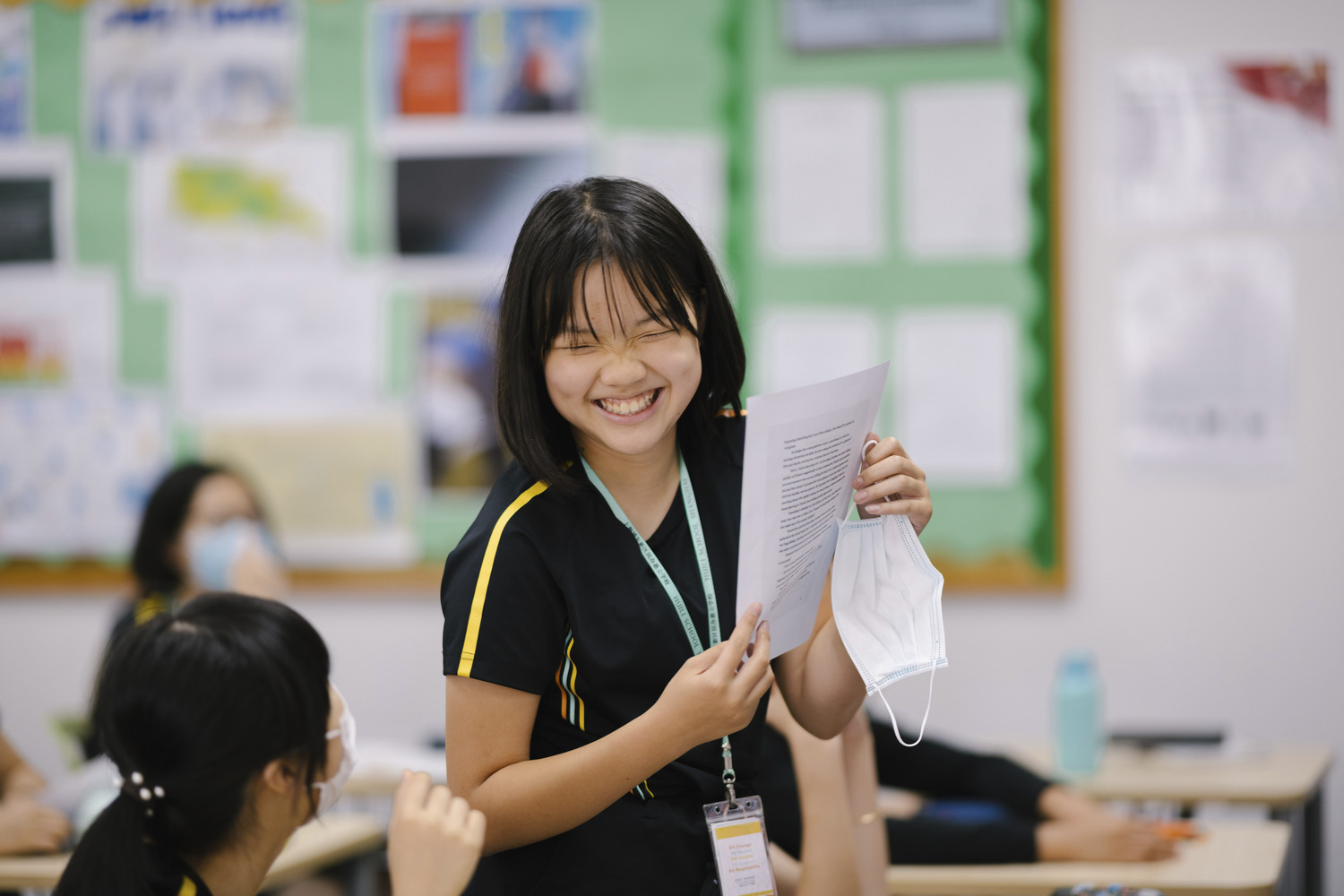 Special thanks to Mr. Stekelis for arranging everything from afar, Mr. Maher and Mr, Wright for supporting me in the classroom, and again to all the pupils for welcoming me so kindly. Workshop Session 1

Daniel Wright Junior High English Teacher The first of the two sessions that Julian led covered his background and the impact that this has had on his stories. Interestingly, success as an author did not come easily for Julian and it was not until he was in his forties, over thirty years after his first attempts at writing, that he was able to become a published author. Our pupils learned the valuable lesson that producing high-quality fiction, as with other creative forms, is something that takes a lot of time, effort and practice. Pupils often get disheartened if their initial efforts at a given pursuit are not outstanding and give up, saying that it is just not their ‘thing’. It is often said that success is 10% talent and 90% hard work and Julian’s session really made this clear to our pupils. In recent weeks it has been wonderful to see pupils who may not have considered creative writing to be their ‘thing’ approaching it with a new vigour. 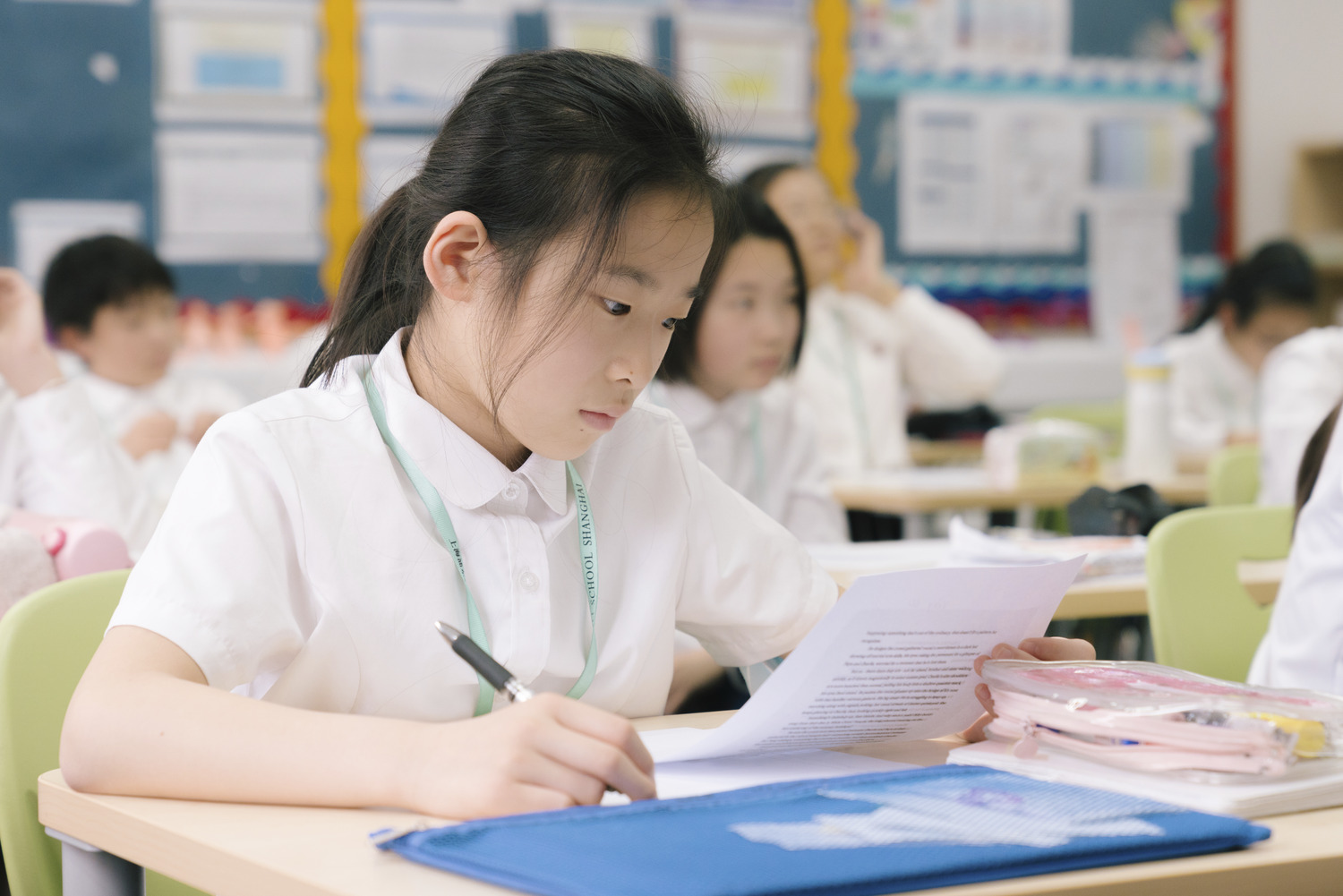 Julian’s success as an author did not come from hard work alone, however. He also explained how his early attempts at writing did not really match what he felt inside somehow and that he was still looking for his own voice as a writer. It was when he wrote stories about those things that he was interested in (ghosts, legends, east Asian myths) or had direct experience of (an unpleasant school experience, circus performances) that his writing really came alive. Pupils often write about what they feel they should write about, or in the style that their teacher wants them to use, and as a result creative writing can feel like a chore. Julian’s story was quite an eye-opener for them. All pupils who participated in the workshop with Julian read chapter 1 of his book, Ghosts of Shanghai, and were tasked with writing their own version of chapter 2. The wide variety of content in these pupil-written chapters, from football-playing ghosts to brilliant scientists, shows that this was something they definitely took to heart.

Shane Maher Junior High English Teacher Before the second workshop, pupils played the role of editor, working through an early draft of chapter 1 of Ghost of Shanghai. Their goal was to identify the elements of the story to keep and what to suggest removing. Julian revealed that he had written some 16 drafts of chapter 1 before he and his editor were happy with his final version. Of the first draft only 2 sentences remained in the published text. It is important for pupils to realise the editing process is also vital to improving their own work. Editing one’s own writing is an essential part of understanding the importance of language and how words convey meaning. Even the most brilliant and beautiful ideas need to be properly shaped and formed if they are going to be clearly understood by the reader.  Without careful editing, written words are simply ‘thrown’ down onto the page as they are conceived in the writer’s brain, in a way that may or may not convey their full meaning. Editing is the process of unlocking the full weight of words, and the ideas that they express. Editing process Editing involves re-visiting the written text and at a basic level, checking for grammatical (tense, subject-verb agreement etc.), punctuation (the use of accurate and effective punctuation such as commas, full stops, quotation marks, question and exclamation marks etc.) and syntax (the arrangement of words and phrases to create well-formed sentences in a language) errors. On a deeper level, it also involves evaluating if accurate and effective communication is achieved, and if the particular genre’s style is achieved. Teachers play the role of ‘editor’ to pupils’ work and pupils should act on comments and suggestions to achieve their potential. Just like a professional author, the work is challenging but ultimately rewarding for teacher and pupil alike. The English department feel this was a central message of the second workshop that Julian clearly conveyed to our pupils. Following the conclusion of the second workshop, our Junior High pupils learned much about what it takes to write fiction and have a book published: vision, determination, patience and enough self-awareness and humility to see that one’s ideas can be improved. Through sharing his own journey to becoming a published author, Julian showed our grade 6 and 7 pupils how it is possible for them to create fantastic, personal and original stories of their own. Perhaps one day, maybe not far from now, a pupil who sat in one of those classes will publish their first book and will be asked to speak at a school. As they take a breath and stare out to the rows of wide-eyed children in front of them, who sit eagerly anticipating the words from the author’s mouth, the old Huili pupil will remember the day Julian Sedgwick made them believe that anything is possible. I would like to thank Julian, Mr Maher, Mr Wright, Mr Blair and Mr Curd for their contributions that have made this such a successful event. We are honoured that Julian took the time to speak with our pupils and look forward to working with him again.

Looking forward to a new academic year after reunion

Looking forward, we will keep marching on