Why do we teach Beijing opera at Huili School?

08 January 2020
Huili School Shanghai is proud of its challenging, engaging and varied art curriculum. Besides its regular music and fine arts courses, Huili also offers courses in performing arts as well as design and technology. Huili’s curriculum, which has been designed to improve pupils’ cultural attainment and their sense of wider global perspective, attaches great importance to carrying forward China’s enduring history and culture. Alongside more modern musical and theatrical disciplines, traditional Chinese drama and opera are also critical elements of Huili’s performing arts courses. BEIJING OPERA is the teaching focus of Chinese performing arts in this semester. Thanks to continuous efforts of renowned performers of different centuries who have worked so hard to absorb and portray the essence of Chinese culture, Beijing opera has been passed down through the ages and today it remains a quintessential part of our country’s culture. It also was listed as part of the ‘UNESCO Intangible Cultural Heritage’ elements in 2010. Despite of its features of profoundness and a requirement of specialist skills to perfect it, learning Beijing opera is still an exciting prospect for our pupils and they respond well to the prospect of taking it on. This is an encouraging sign that Beijing opera will still be passed on to future generations.

Teaching pupils to appreciate Peking opera begins with learning how to wear its many costumes. To this end, we purchased a variety of exquisite costumes specifically tailored for this course. These bright-coloured costumes with their delicate embroidery have brought strong visual experiences to our pupils, who can easily imagine the characters of ancient generals and ministers and are eager to bring them to life on stage. The key to teaching Beijing opera and igniting pupils’ passion for exploring it lies in building their knowledge of ancient Chinese history – a cornerstone of cultural understanding. 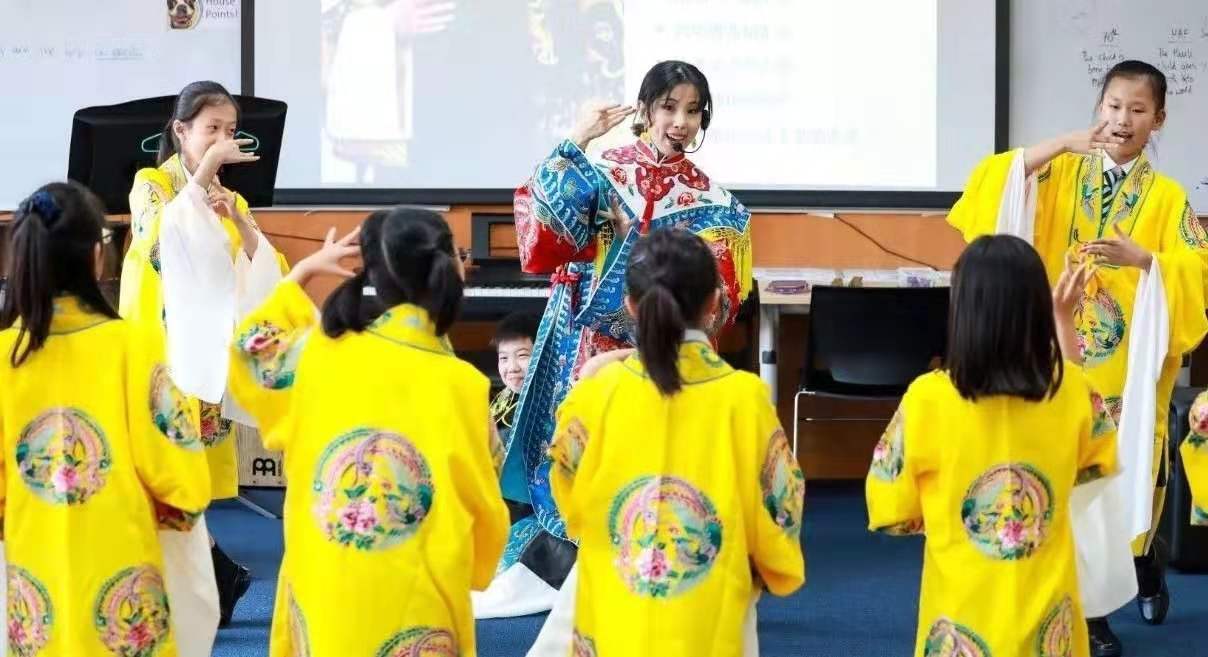 Yang Guifei, as a female character of the Peking opera ‘Imperial Consort Yang Guifei of Tang Dynasty’, is a typical female role in Beijing opera performance. Many of our girls have already taken a keen interest in this legendary role and will do their utmost to play the role well. Character of Yang Guifei in Beijing Opera Judge Bao Zheng is another famous figure in china’s history, and he features as a central character in the Peking opera: ‘The Case of Chen Shimei’. When many of our boys began learning his lines in this play, they were quickly absorbed in the process and before long they were singing his lines with sincerity and conviction. Although pupils have only enjoyed lessons in Beijing opera for two months, already they have acquired a good understanding of this artform. Some of them even took part in outside performance activities on behalf of the school. 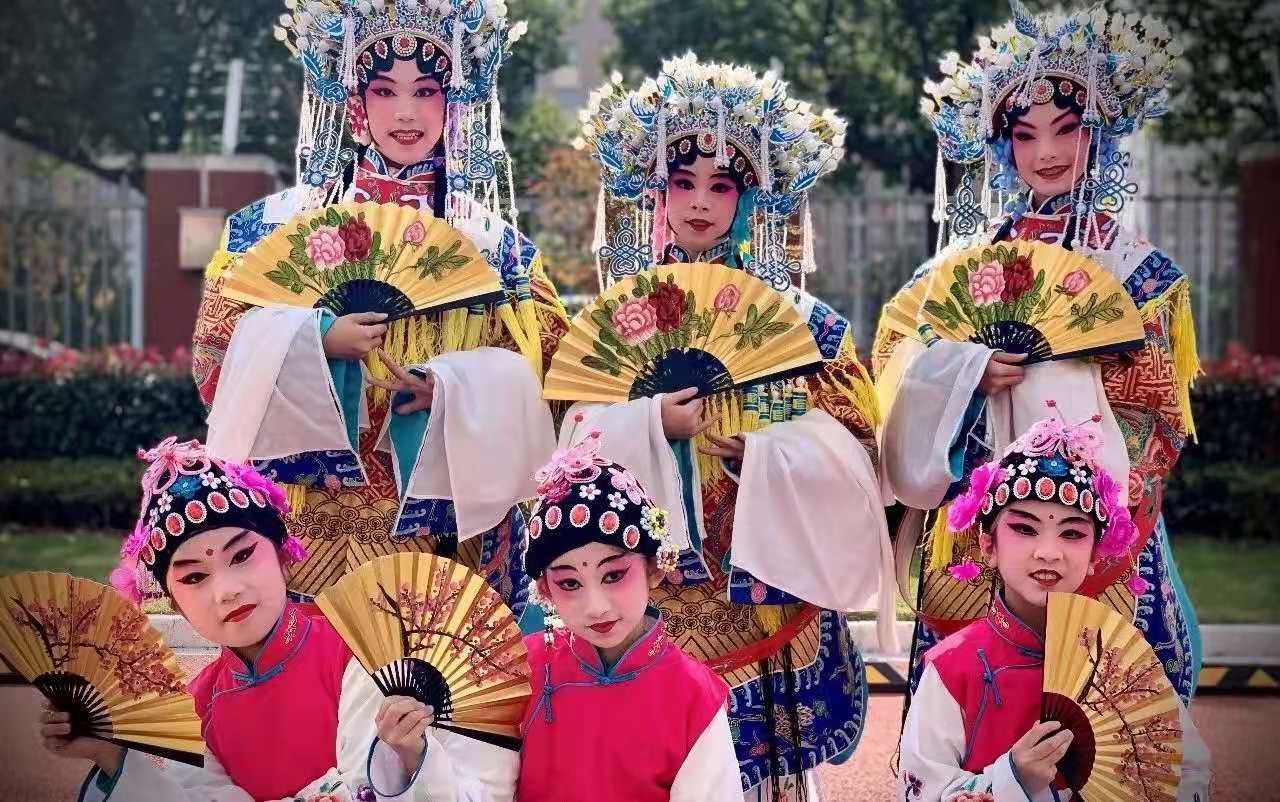 Pupils’ positive feedback on learning this vital discipline has strengthened our commitment to passing down Chinese culture. 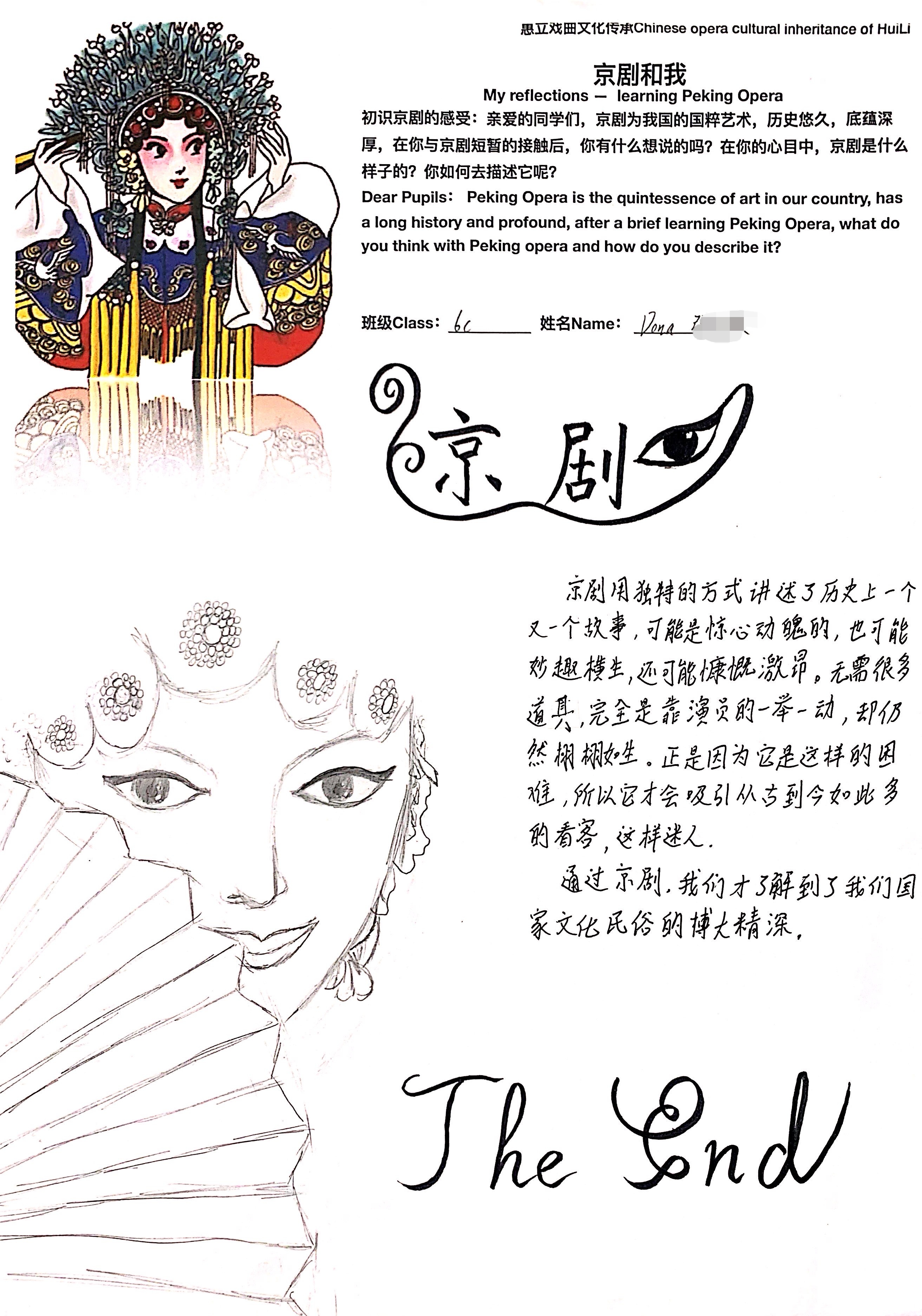 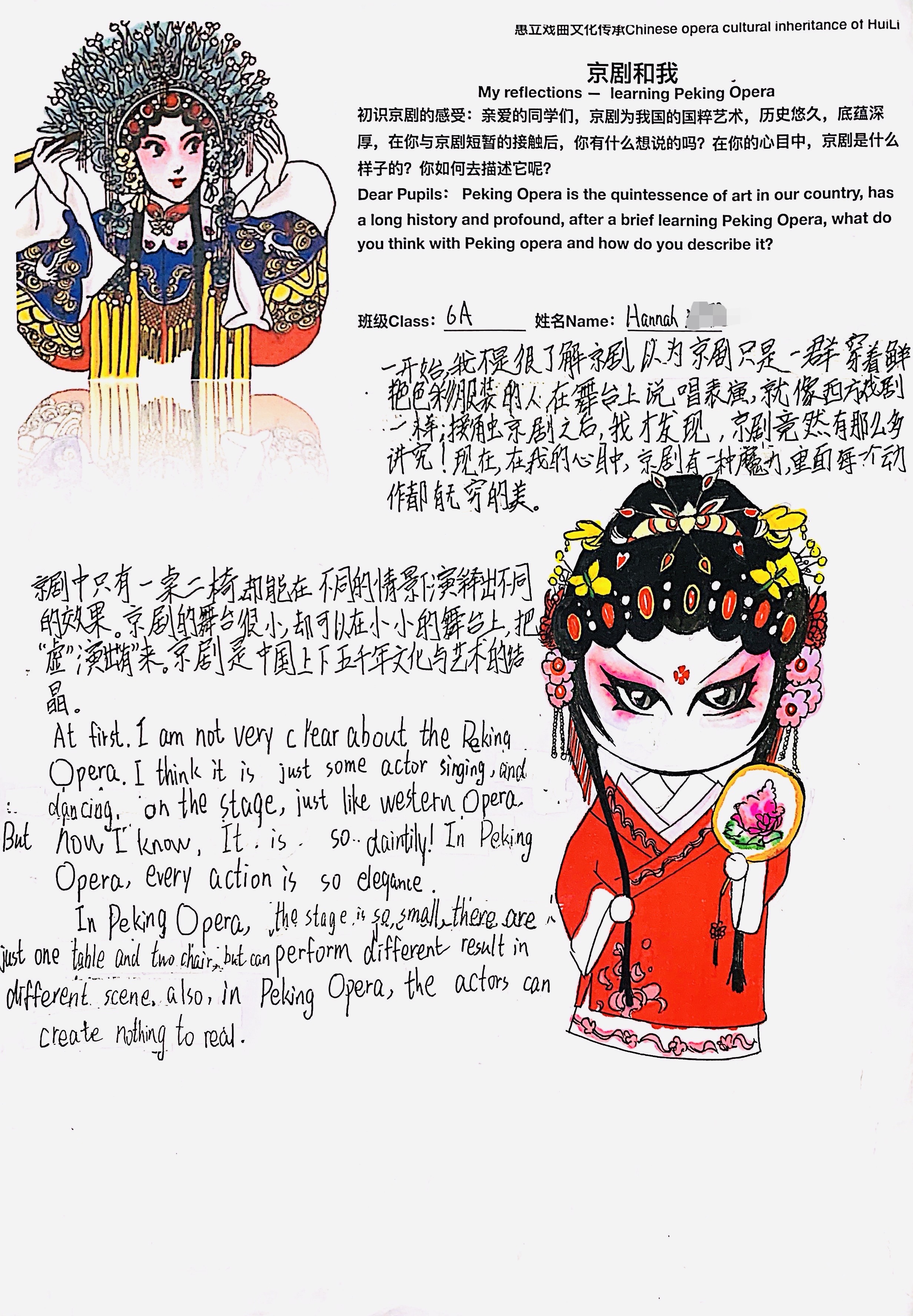 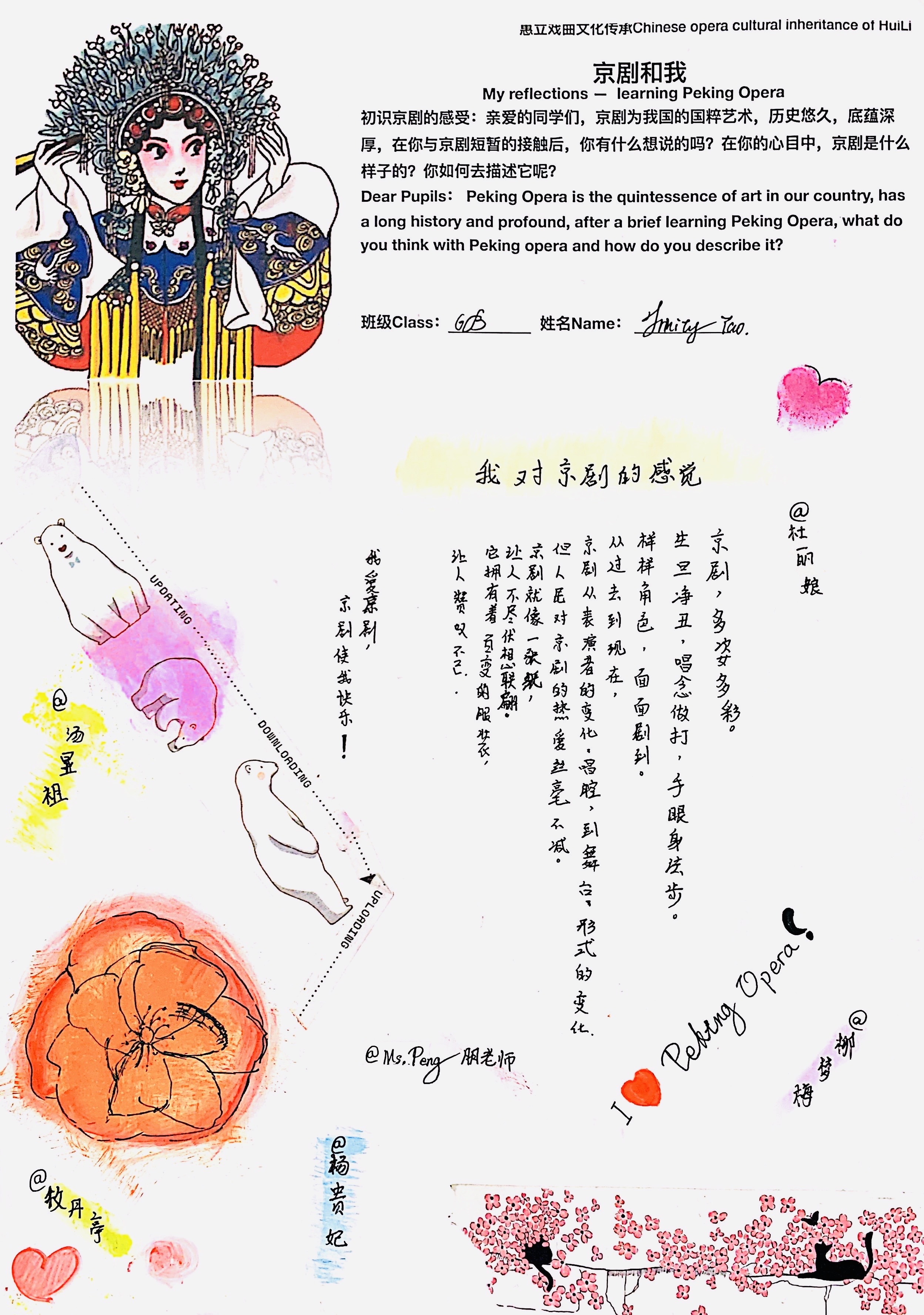 We would like to share some of the pupils’ thoughts on Beijing opera based on their experiences learning it: When I began to learn Beijing opera, I found that it was so meaningful that every movement contains its own lasting appeal and beauty.

Beijing opera enables us to understand China’s profound traditional culture. It narrates astonishing, yet entertaining historical stories in a unique way. Gestures and expressions of performers are so attractive that it is no wonder ancient and modern audiences are all obsessed with it.

I thought that Beijing opera was abstruse, but the past two-month learning period has totally changed my view on it. Now, I am deeply fond of it.

The moment that I put on the phoenix coronet, I felt as if I had travelled back in time and experienced the splendour of the imperial consort of Tang dynasty. We have gained a good understanding of charm of Beijing opera through Serena Peng’s instructions.

At Huili, we will continue to develop our performing arts courses. Apart from Beijing opera, pupils also explored Shaoxing opera in their ‘China Classroom’ field trip to Shaoxing. In the future, they will also be exposed to more classic performing arts, such as Kun opera. 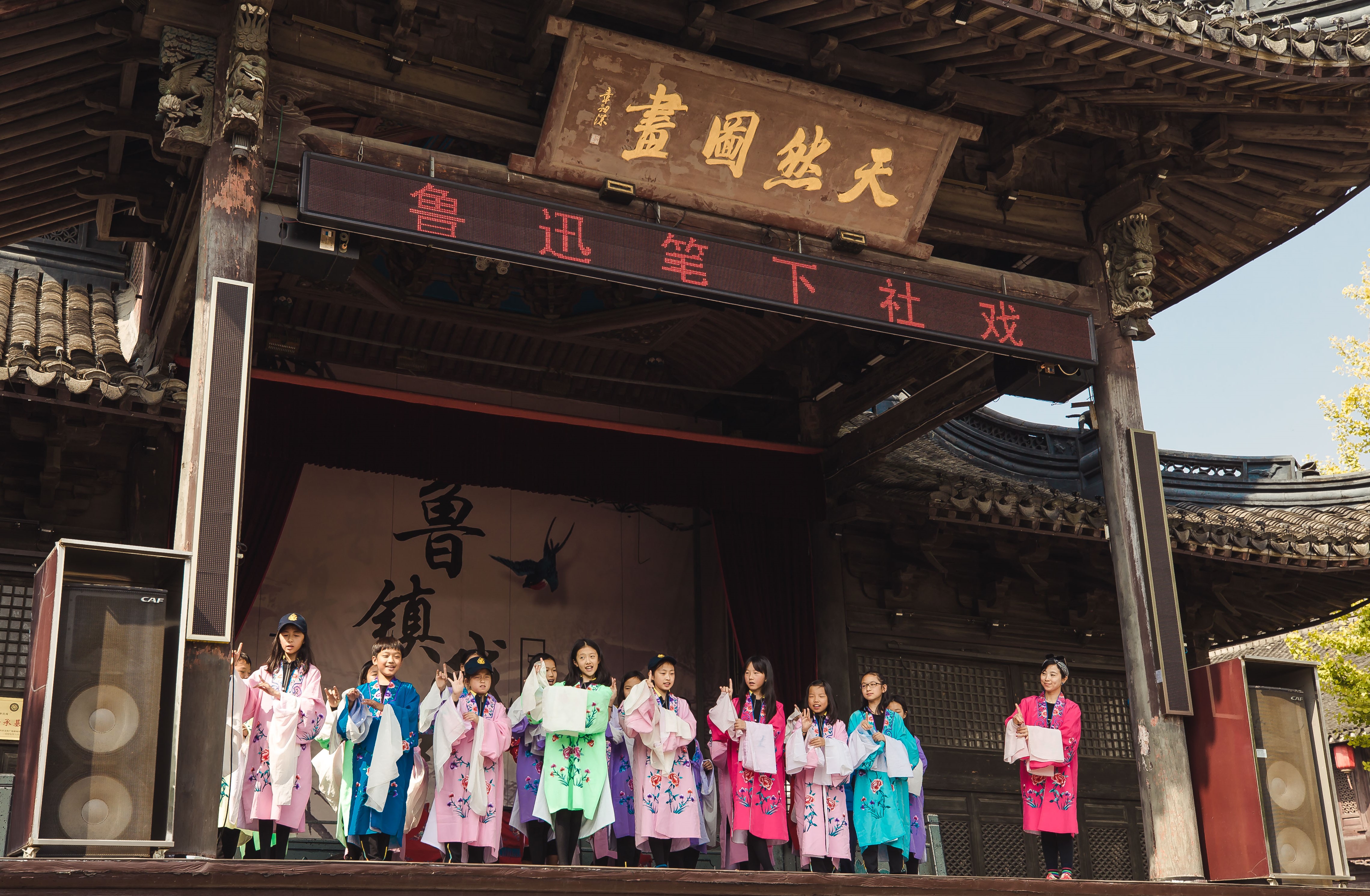 Our world is full of diverse and rich artistic cultures. We hope that, by teaching them China’s quintessence, Huili pupil can be proud of our traditional culture while learning from that of other nations.  This is also conducive to establishing their ascetic appreciation, respect and inclusiveness of different arts. 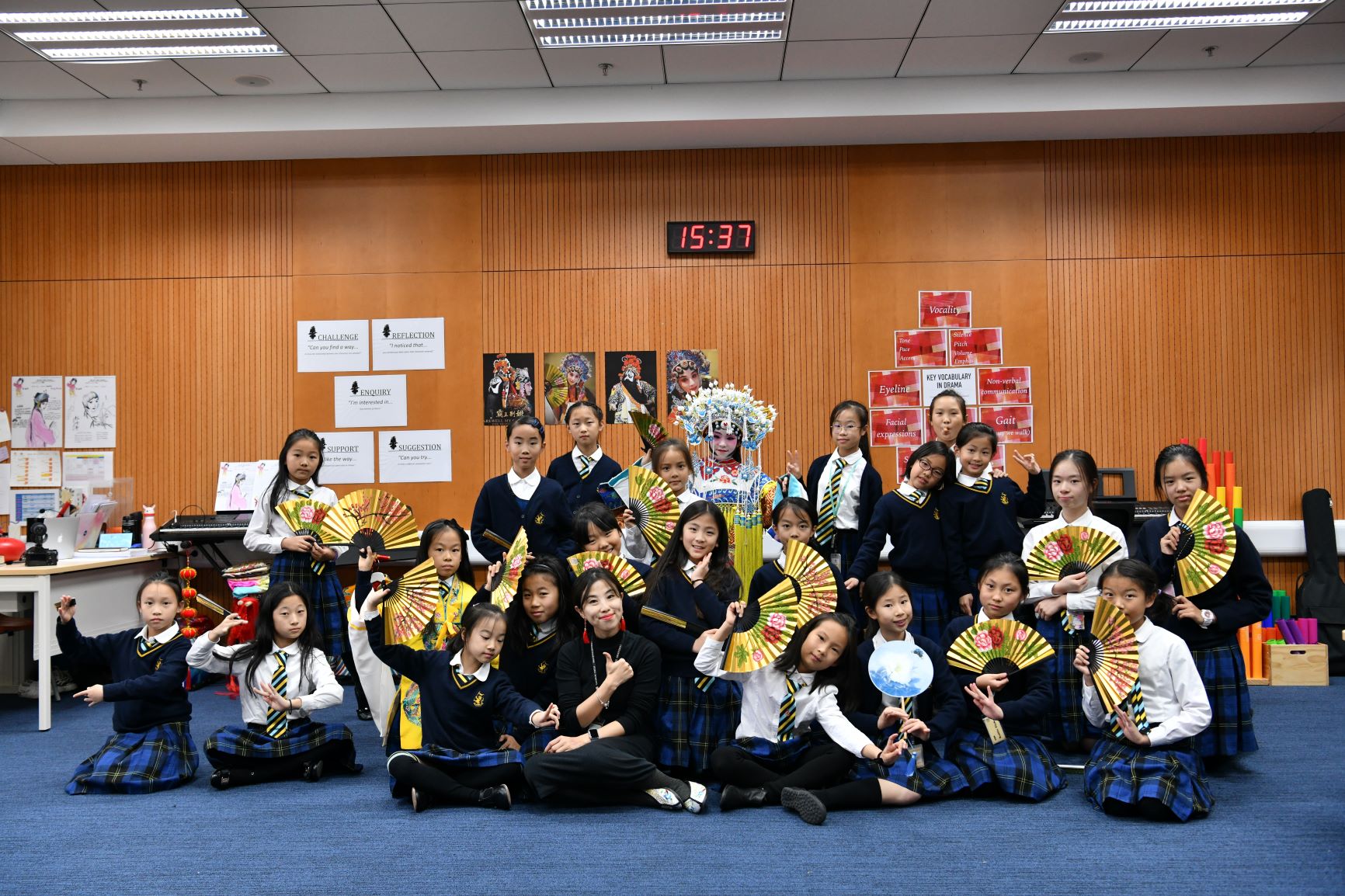 How to Support your child at Home -English 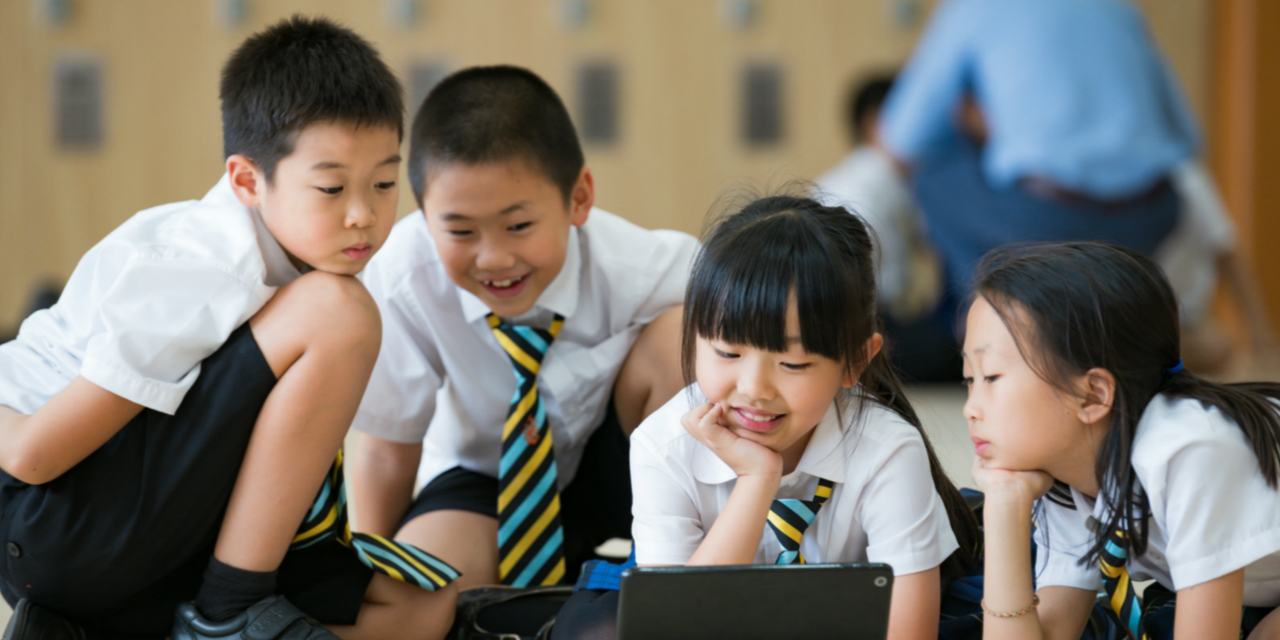