Celebrating the centenary of the CPC 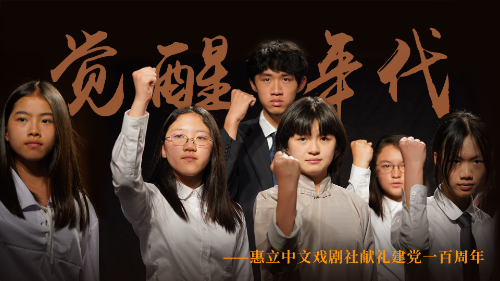 The Huili orchestra played ‘Not Forgetting the Beginning’, the Chinese Drama Club wrote and performed the play ‘The Age of Awakening’, and the school invited two communists to speak about the close connection between individual destiny and the development of the country.

In the New Culture Movement, the debate between the old and the new helped the students understand that to save China, it was necessary to 'awaken' people’s thought. The May Fourth Movement, led by intellectuals such as Cai Yuanpei, Li Dazhao and Chen Duxiu, gathered young students, teachers and workers in an effort to enlighten them, thus bringing the influence of renewal to the old China. The convening of the first Communist Congress in 1921 laid the foundation for the development of China in the century that followed. The new force represented by this revolutionary army remains the source of power for the Chinese Communists to this day. 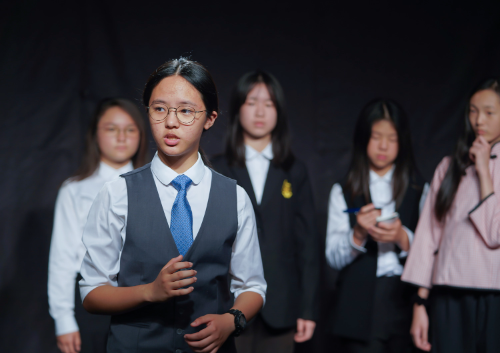 ▲Stage photo of 'the Age of Awakening'

Through rehearsing this play, our pupils were able to experience the journey of the most influential figures of the times and portray their patriotism and the spirit of the Communist Party. The play ‘The Age of Awakening’ won the grand prize at the ‘Red Scarf Towards the Party’drama exhibition activity organised by the Pudong New Area Youth Work Committee. The play allows us to consider the impact of that time on China today. Party history and culture are profound and worthy of study. They help pupils to better reflect on the present and identify the source of motivation, mission and goals.

The struggle and the glory of the country

After the ‘Age of Awakening’, the Party and the country have also ushered in the age of peace and the age of thriving one after another. Today we cannot take peace and the rise of the country for granted because they came about through generations of struggle and devotion.

In the ‘Learn the history of the Party, strengthen your beliefs and follow the Party’ theme, Huili School invited an engineer of the "Two Bombs and One Star" project and a veteran who fought America to aid North Korea. They told pupils and teachers about their revolutionary struggles, making them realise that behind the great changes in the country were the struggle and sacrifice of numerous communists. They were inspired by their firm belief in the revolution and their love for the Party and the country. 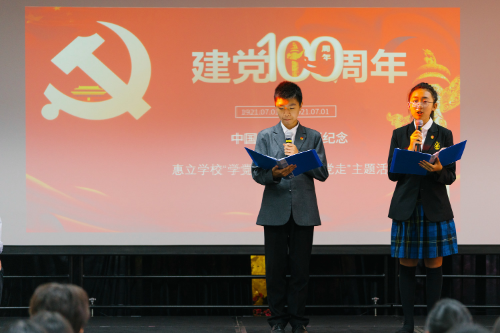 ▲The 'Learn the history of the Party' activities at Huili

Mr Chen Ze, who is 84 years old this year, went to Korea at the age of 14 to participate in the war against the US. By listening to his narrative, the war was no longer just a few lines or paragraphs in a history textbook, it became a living experience and memory. The threat of death from the war did not deter the soldiers' determination. The security of the country's territory and the peace of millions of Chinese people was the supreme belief in their hearts.

If today's peace in China is inextricably linked to the bravery and sacrifice of heroes like Mr Chen, then the development of China today is closely linked to the dedication of people like Mr Xu. Mr Xu Zhengui, who is 77 years old, was a member of the "Two Bombs and One Star" team and responsible for the technology of China's nuclear projects. He worked, lived and fought in the Qinghai nuclear base for more than 30 years from 1964 when he went there to participate in the development of the first atomic bomb and the first hydrogen bomb in China. ▲Communists shared the history with the Huili pupils

As a  promising young technician, he dedicated the best years of his life to the nuclear cause of the country. In him, we see the sacrifice for the country which is a great work that can only be accomplished by the accumulated effort of several generations. The old comrades’  recount of the great years made us feel the spirit and power of the party in a tangible way. We deeply appreciate the strength of individuals which can eventually converge into the immense group power and bring glory in the history of China.

Carrying forward our cause and forging ahead

At the same time as the 100 year celebrations, we are also commemorating the 30th anniversary of the development and opening up of Pudong. Whether it is 100 years history of CPC or 30 years development of Pudong, we are witnessing together the great rejuvenation of the Chinese nation.

▲Huili pupils visited the exhibition of the 30th Anniversary of

Pudong's development and opening up

The landscape is so beautiful that it has prompted countless heroes to sacrifice their lives. If only there was a time machine to travel back a hundred years, we would tell them that the new China is striding towards the forefront of the world and making its mark on the times.

Welcome to the new academic year